When traveling on the 400-mile Gullah-Geechee Cultural Heritage Corridor  which runs from Wilmington, North Carolina, to Jacksonville, Florida, you’ll be remiss if you don’t stop to experience the cultural cuisine, art, and history.

First stop on your road trip should be McKinnon’s Seafood. Aldrena McKinnon’s kitchen is a beehive of activity.

Shuffling pans and sizzling oil are overshadowed by the voices of Aldrena and her son, Chef D’Auntee, as they combine spices and prepare specialties to serve. In the front dining area, customers devour cultural cuisine staples like fried pork chops and mac-n-cheese, while stopping for brief conversation or grabbing a glass of Geechee Sweet Tea or Gullah Lemonade.

At McKinnon’s Seafood, Wings, and Gullah Tingz in Beaufort , South Carolina, it’s a family affair grounded by the culinary skills of Aldrena McKinnon and the legacy of her grandfather, legendary Gullah net maker Joseph “Capt. Crip” Legree Jr. When the family restaurant opened in late 2020, it was imperative to honor family and culture.

The menu features Gullah favorites like okra and rice plus local seafood, shrimp, oysters, and clams. For a true culinary experience, order Capt. Crip’s Gullah Boil or Top Cat’s Catch, both of which were created in honor of her father, Algerene McKinnon, Sr.

“It nourishes the soul,” says Gwen of her sister’s cooking. Nourishment, one could say, is the root of the Gullah-Geechee culture. Whether through food, art, or language, those with deep-seated roots in the West African legacy of the barrier islands are holding on to its history, and it’s making a difference.

This area has a rich heritage dating back to the mid-1700s when West Africans were enslaved on coastal plantations. The peoples who settled here, the islanders of the Carolinas (Gullah) and then islanders of Georgia/Florida (Geechee), brought traditions and skills from Liberia, Ghana, Angola, and Sierra Leone. Taking a road trip through this area will open your eyes to the past while you visit destinations that embody the history and culture of the Gullah-Geechee.

Back in downtown Beaufort, artist Lisa Rivers owns Legacy Art Gallery, which is where the Gullah culture lives vibrantly on the walls. As Rivers moves from one canvas to the next, it’s almost as if she’s flipping through a family album. 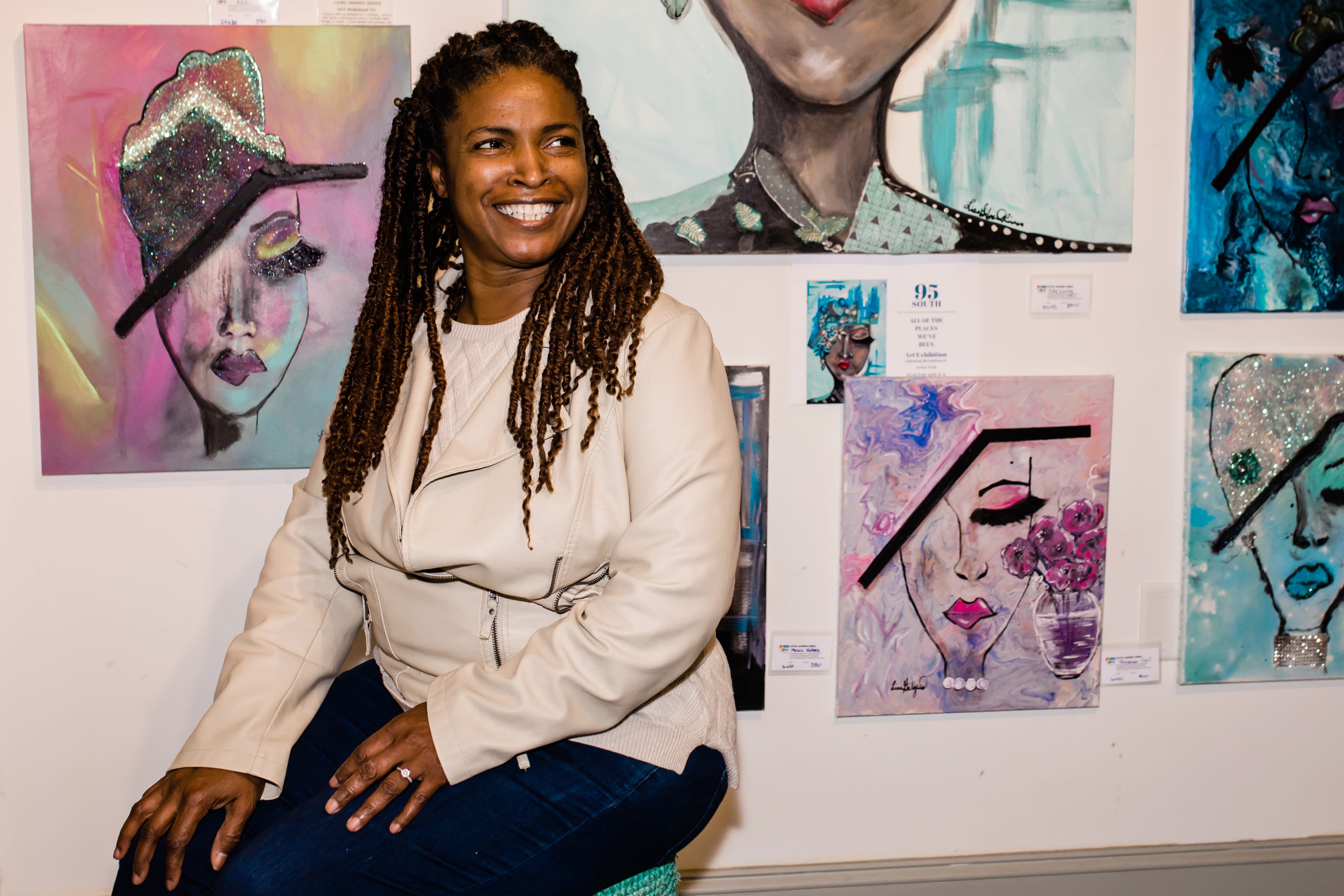 “I always wore Buster Brown shoes,” she laughs as she points to the painting of her grandma’s house with a little girl bouncing up the steps. While looking at another painting hung on the wall, she says, “This is my house. We always had chickens running around and always had to do chores.” She picks up a sweetgrass basket, “Gullah culture is known for rice,” shaking the basket as women would do as they picked the rice. “Sweetgrass baskets were used to kick off the dust. This skill was learned and passed down from generation to generation; it was a lot of labor, and we learned how to create.”

At 52, Rivers is a self-taught artist who can do what her heart desires — cook, sew, sing — all because she “learned these things growing up.” Her paintings depict the history of her Gullah heritage and family. Her impressive Level Minded series visually balances thoughts darting through her mind. Her Coastal Seasonal series portrays Africa watching over the Sea Islands and her people.

The dynamic colors and joy illuminate Rivers’ canvases that distinguish her work from the others. “I used to wear everything that was bright; I should have known that one day, I would likely be an artist,” says Rivers contently. “Now, here I am.”

On St. Helena Island, the Gullah-Geechee Visitors Center welcomes those who are passing through the area. Rev. Kenneth Hodges, pastor of the historic Beaufort Tabernacle Baptist Church, grew up on the other side of St. Helena Sound. 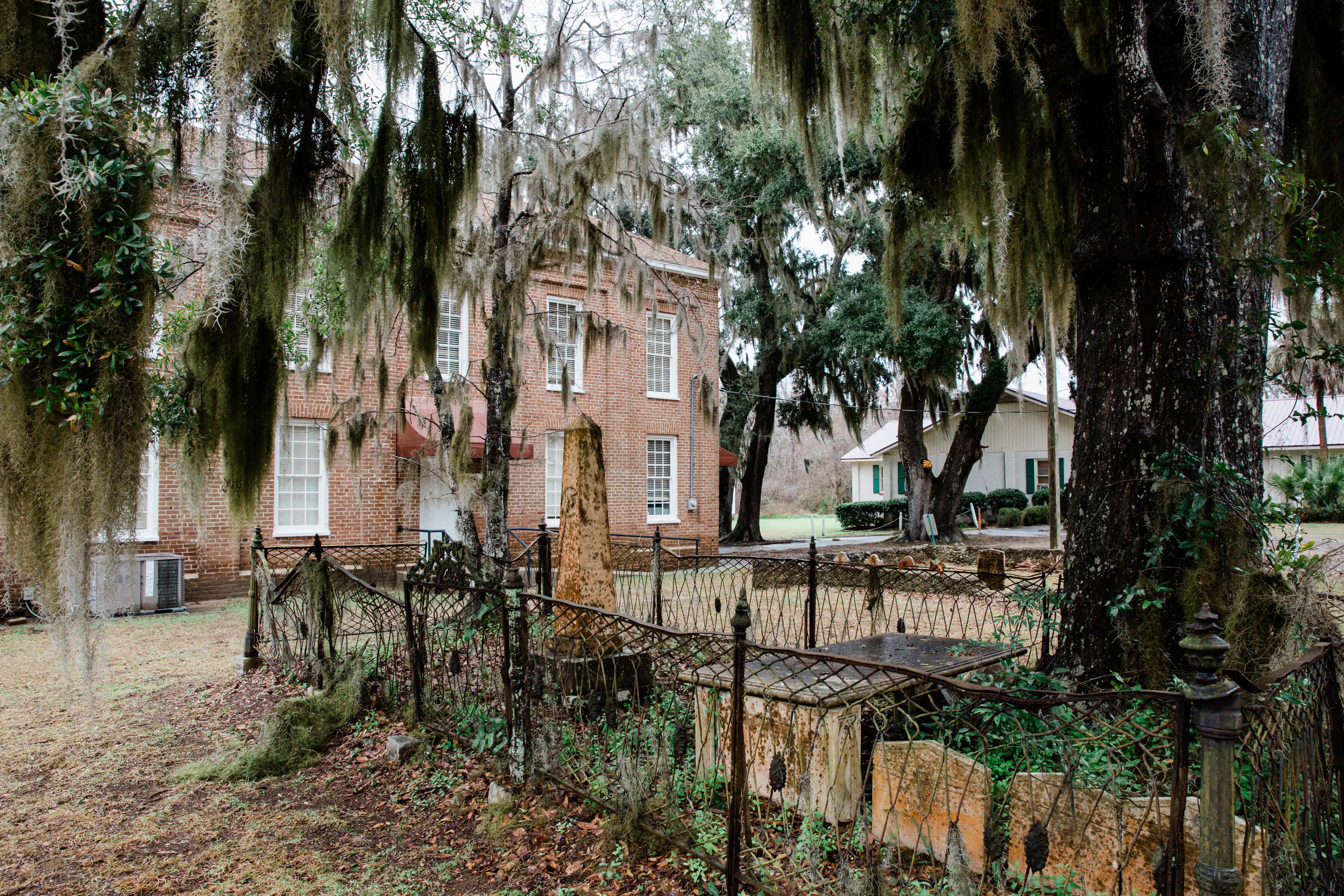 The center is a “way of highlighting many local artists,” says Hodges about the hundreds of artifacts exhibited in the building. “Many people don’t understand how independent the culture is. It’s a history they have held onto for generations. Because they were so isolated on the barrier islands, they had to do everything and rely on their own skills. They were self-sufficient.”

This culture still thrives along the coast. “I don’t think Gullah will die out,” says Hodges. “I think there’s a thread that will hold onto the past. Many young people are beginning to take a sense of pride in their culture. Like sweetgrass weaving, Gullah will survive.” 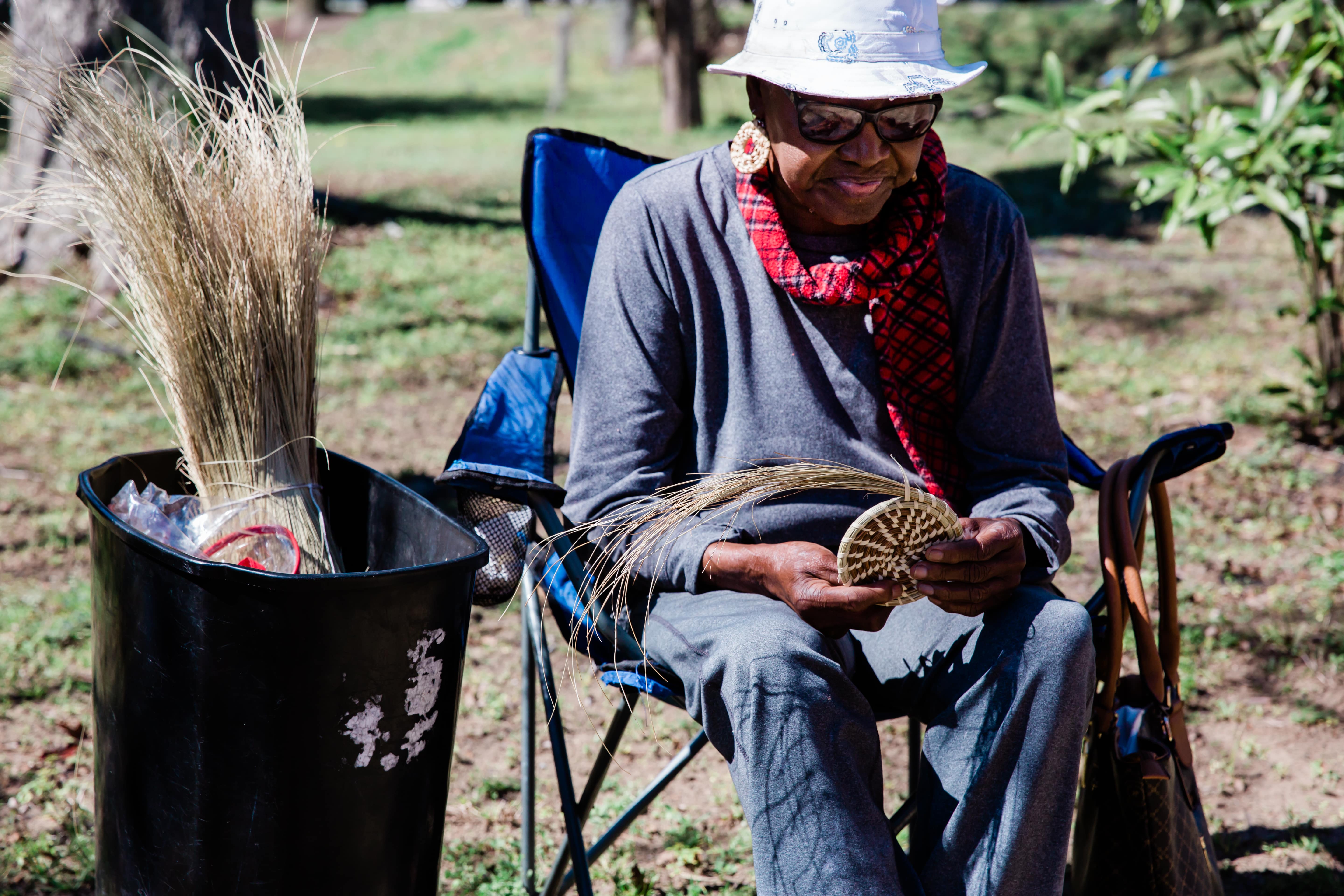 Inside the center, Joseph Bryant, known as Rev, visits, and shares stories of his Gullah heritage in his distinctive English-based West African dialect. He lived on St. Helena Island and was raised by “Geechee pee pal in Bo Pert,” he explains. Although I couldn’t understand every word because of his distinct accent, Rev speaks of his favorite food, “good ol’ red rice and BBQ ribs, lemonade squeezed by good pee pal, tingz like that.”

Continuing on your road trip, about a half a mile from the visitor’s center is Penn Center , formerly Penn School, one of the country’s first schools for former slaves. Considered the epicenter of the Gullah-Geechee people and Civil Rights, it is where Dr. Martin Luther King Jr. stayed and began scripting his “I Have a Dream” speech. It was across the street at Brick Baptist Church, built by slaves, where King would practice this speech in 1963. In 2017, the area was named Reconstruction Era National Historical Park.

The most iconic restaurant on St. Helena is Gullah Grub. For almost two decades, Bill Green has been serving authentic Gullah cuisine, relying on the fundamental concepts of serving fresh and seasonal ingredients. Although the pandemic has temporarily closed the restaurant, he and his wife Sara are still cooking and keeping busy, serving homecooked meals to the community in need. Bill is also taking advantage of the temporary shutdown by renovating the restaurant.

For fresh ingredients and an immersive experience on your road trip, visit Marshview Community Organic Farm—a family-owned and operated farm since 1863. “We teach the youth and adults how to use the soil to be sustainable,” explains Sara. “Just one seed and see what will happen when you put that seed in the ground, the amount of food you can get.”

Not only do the Greens teach individuals how to farm, they also focus on promoting intangible qualities such as collaboration, tolerance, patience, and love/kindness. “It’s the Gullah way,” Sara continues. “Whoever had a lot would share with those who didn’t. That’s how we grew up on this island. We depended on each other.”

After you return from your road trip, you can virtually take Bill Green’s cultural cuisine and cooking expertise home with you through his YouTube channel . One of his cooking secrets is slow cooking. “Use your senses,” says Bill, who’s been cooking for 58 years. “People these days watch the clock; Gullah people watch the pot. They’re listening to the pot. They smell it. Taste it. Then they feel it. Put all that into the pot.” 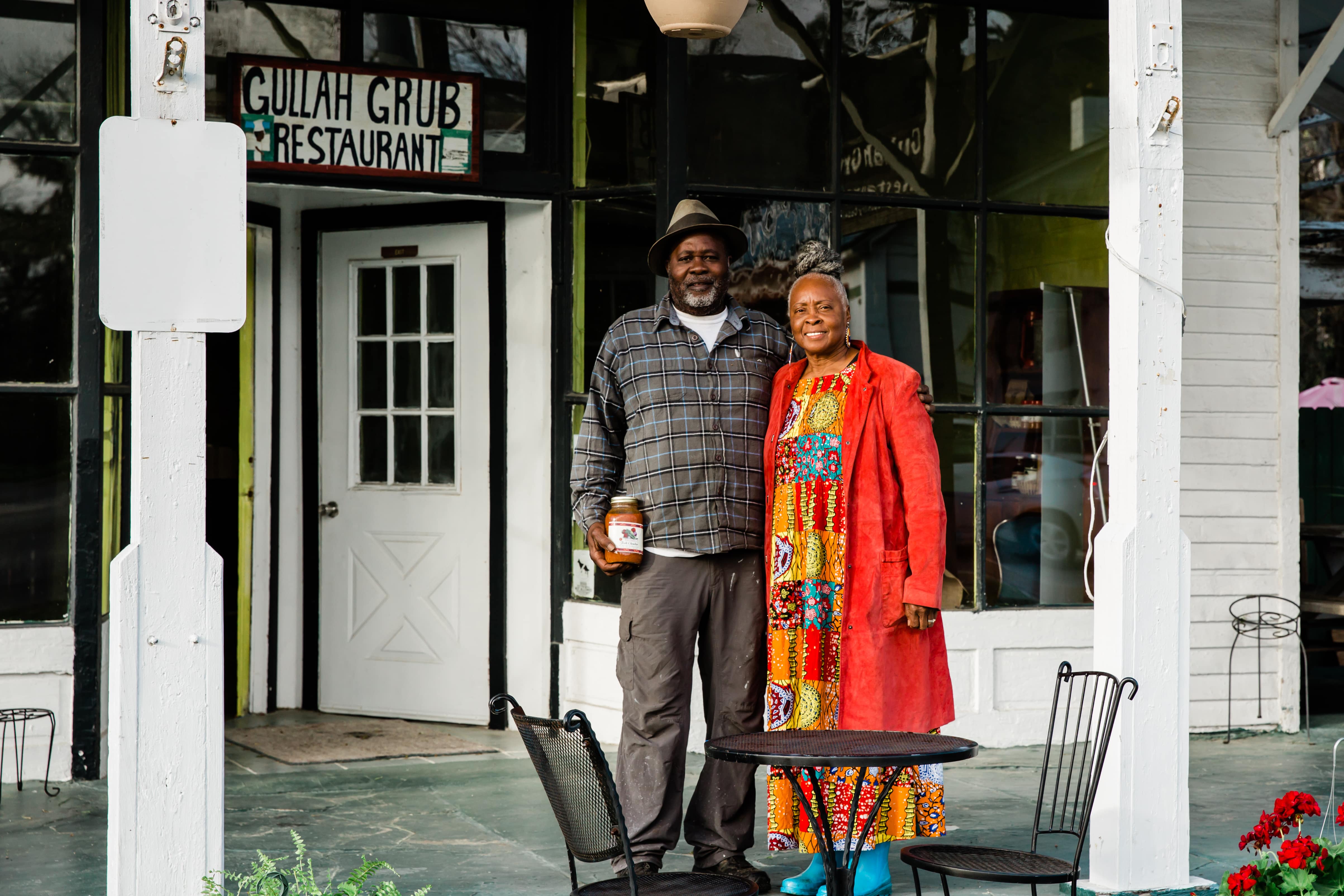 From the northern section of the corridor to the southernmost post, elements of the Gullah-Geechee culture linger because artisans, chefs, and storytellers continue to share their history with travelers and their coastal communities. Keeping their culture alive nourishes civilization as a whole, allowing us to never losing sight of exactly who we are and from where we’ve come.

Road Trip Alert: Wilmington to Asheville Along I-40

Online Travel Events to Inspire Your Next Adventure